SINS OF A VIRGIN by ANNA RANDOL 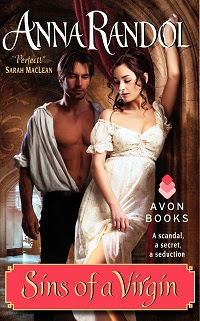 Madeline Valdan, ex-spy and current courtesan, shocks all of London by setting up an auction for her virginity.... Yes, you read that right. The beautiful former British spy, who has men all over London falling at her feet has decided she wants to live very well after being let go by the British government with a pittance to show for her years of work. Madeline's beginnings were not very bright, but in her darkest hour she was given a chance to live, but in service to the crown. Never completely free and always surviving with deception.

Gabriel Huntford is a Bow Street Runner ( London's first professional police force), who has an obsession with finding his sister's killer. In a attempt to curb Gabriel's seven year obsession, his superiors have given him the undesirable task of watching out for Madeline and "assisting" her in the quest to sell her virginity to the highest bidder.Gabriel is to investigate the eager suitors who bid in the auction and see whether they are financially able to follow their bids.

Gabriel insists he has better things to do, but when Gabriel finds Madeline in mortal danger, his innate sense of decency has him protecting Madeline at every turn. Once Gabriel spends time with Madeline, he finds that there is so much more to her than meets the eye, and their continued proximity to one another sprouts an attraction that could be hazardous to his state of being.

I will honestly say, when I read the back cover I was a bit taken aback. The title itself made me hesitate, but once I picked it up, Sins of a Virgin was quite the enjoyable read. The depth that Anna Randol has taken Gabriel and Madeline keeps you rooting for the unconventional characters, even hoping that Madeline doesn't achieve what she has set out to do. The humorous and sarcastic banter between the two is highly entertaining as is the dark mystery that has Gabriel and Madeline on edge. I am looking forward to reading more by Anna Randol. I really enjoyed this story and I think you will as well...