In The Barrister's Bed by Tina Gabrielle 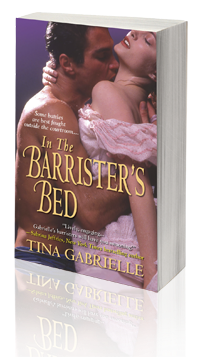 James Devlin has made the most of his life as the bastard son if a Duke. He has become a barrister and a damn good one too. In his own words, he never loses. Surprisingly enough to him, he evidently is not the bastard of the Duke of Blackwood, but the legitimate son of the Duke and a housemaid who his father ran off with and married. Jame's mother passed away and the Duke returned to his life in the ton, making sure his son was taken care of but never claiming him as his heir until on his deathbed he confesses to his mother, the Dowager Duchess.

When his grandmother comes to tell him of his good fortune, he is in shock, but also eager to reclaim the only  place he ever felt close to his deceased father, Wyndmoor Manor, a small home that his father spent a few weeks each Summer with his son, where James felt like a son and not a bastard. When he finds that his home was sold off by his father before his death, James finds the man who purchased Wyndmoor Manor and reclaims it. Upon returning to Wyndmoor, he finds someone else in residence to his dismay.

The beautiful widow, Bella Sinclair, has survived seven years married to a tyrant. Her husband was physically and verbally abusive to his innocent and much younger wife. His death was a godsend, leaving Bella still with her youth and the determination to make something of her life. She has always wanted to be a writer. As luck put some money in her hands, she purchased Wyndmoor Manor and moved right on in. When James Devlin, Duke of Blackwood appears in her home, the two are at odds with one another.
First, the both retain a deed for the purchase of the Manor, evidently purchasing from the same seller. Second, they are both instantly attracted to each other, but Bella has been too much in her life to throw it all away. She is determined to prove that Wyndmoor belongs to her.

When James insists that he and Bella both reside at the Manor until the unscrupulous seller is found, against her better judgement, Bella agrees, hence begins a cat and mouse game with James, the brooding bachelor, who insists he never wants to marry, and Bella, the headstrong widow who even though feels her strong attraction to James,  wants to retain her freedom as well.

When Bella's past comes to haunt her, danger abounds as she could lose everything. When James finds there is much more than meets the eye to the enchanting widow, his protective instincts come alive and he finds himself doing things completely out of character, which in turn, leads to a riveting story.

This is the first book by Tina Gabrielle I have read, and to be honest I couldn't put it down. Not just a romance, In The Barrister's Bed has a great deal of mystery which leads to a great read. James a self proclaimed womanizer, turns out to be more honorable than you would think a barrister or a rake would be, and although Bella has been through a personal Hell in her marriage,she is no shrinking violet. I loved that. I adore James reforming his old ways, even if he hardly recognizes that he is. In The Barrister's Bed,  is a solid and exciting story that I recommend to all and now I am going to pick up all of Tina Gabrielle's previous reads and well as wait for all of her future ones.