SPOTLIGHT & GIVEAWAY ~INTO THE FURY by KAT MARTIN~ 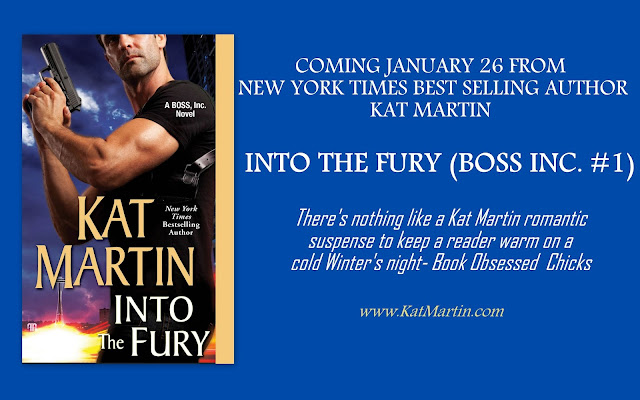 WHAT’S IN A NAME?

In the course of writing more than sixty books, I’ve learned that a character’s name is extremely important.  I spend hours pouring over lists of names:  American, English, Italian, French, Japanese, Russian, Chinese, etc.
Months before I start a novel, I begin to work on choosing the right names for my hero and heroine, which is a way of getting to know them.
I like names that evoke an instant picture.  I’ve been writing about the Brodies for the last five books, men with strong family bonds.  Ty, Dylan, Nick, Rafe, and now Ethan are names I hope will make the reader think of guys with strength, courage, and principals--and of course tons of sex appeal.
In INTO THE FURY, Ethan is a private investigator who works for his cousin, Ian, the owner of Brodie Operations Security Services, Inc. in .  BOSS, Inc they call it.  Ethan’s a man used to taking charge, a hard man and capable, but he isn’t happy about his current assignment--babysitting a bunch of self-absorbed lingerie models on a cross-country fashion show tour.
Ethan is a man who has lost faith in the opposite sex--until he meets one of La Belle’s top ten models--Valentine Hart.
Val is another example of the importance of a name.  Valentine Hart is actually her stage name and I think it does its job.  Valerie Hartman is nothing at all like the image her stage name projects--though it takes Ethan a while to figure that out.  And to learn there is a lot more to a being a top model than just having a pretty face.
Ethan is 6’3 and built like a brick house.  I can’t imagine a guy named Ethan Brodie being a wimp.  Or a woman named Valentine Hart being anything but a sex pot.
Another member of the BOSS Inc. crew is Dirk Reynolds, another strong male name.  Since Dirk was supposed to remain a secondary character, I gave him a bad-ass cropped horseshoe mustache and a cool dragon tattoo.
Then Dirk wound up being such a hunk I had to give him a book of his own!  INTO THE WHIRLWIND will be out in June, one of my all-time favorites.
INTO THE FIRESTORM, the final book in the trilogy an another of my all-time favorites, is Luke Brodie’s story--a bounty hunter extraordinaire.  Luke was former special ops.  He’s infamous as a bail enforcement agent and unrepentant womanizer--until he meets his match with Emma Sullivan.
Choosing Emma’s name took me weeks and truth be told, it still doesn’t sit exactly right.  Emma Brodie works better for me--fortunately this is a romance so we are pretty sure she’s going to end up with the right name eventually!
I hope you’ll look for Ethan and Val in INTO THE FURY, out January 26th, and that you’ll watch for the next two BOSS Inc. novels, INTO THE WHIRLWIND and INTO THE FIRESTORM.

Till then, all best and happy reading, Kat 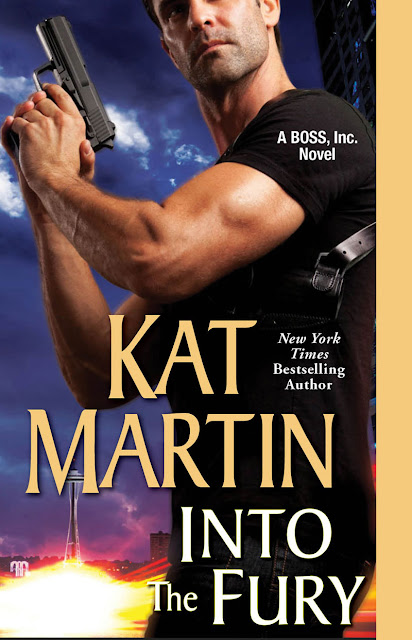 One lucky reader will win a copy of INTO THE FURY!
LEAVE A COMMENT BELOW.  If you have read Kat Martin before, what is your favorite book? For new readers, who is your favorite romantic suspense author?
Posted by Kimberly Rocha at 8:00 AM