RELEASE DAY BLOG BLAST ** ROGUE: SONS OF SANGUE #4 by PATRICIA A. RASEY**: IN ADDITION, A BOXED SET SALE AND GIVEAWAY 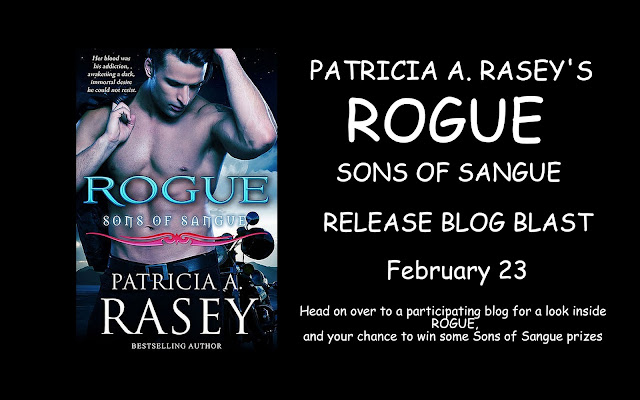 Welcome all to a day so many have waited for, release day for Patricia A. Rasey's
ROGUE: SONS OF SANGUE #4 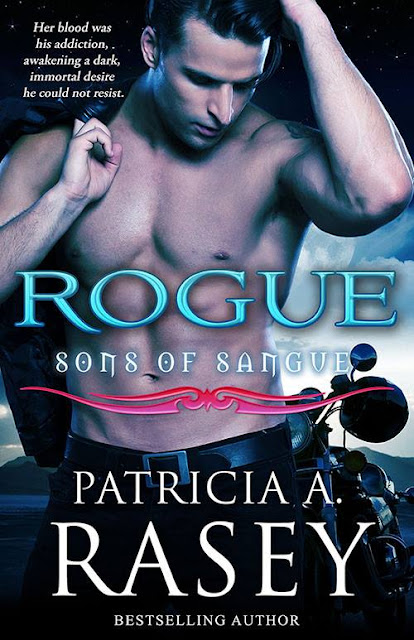 BOOK SUMMARY
Vampire MC member Anton “Rogue” Balan, aka Blondy, has turned his back on the powerful Sons of Sangue, betraying the brotherhood he once considered his family. Or so his vampire brethren think. Changing his appearance, his persona, and signing up with rival gang, the Devils, Rogue has gone deep undercover to catch the La Paz Cartel’s kingpin. Having lost a woman he once thought he would spend eternity with, Rogue now feels he has nothing left to lose . . . that is until a temptation named Kimber James invades his dangerous world.
Strait-laced Kimber has a problem and his name is Anton Balan. After an impulsive night of passion with him more than a year ago, the small-town librarian still has the hots for the sexy biker next door. She can’t deny her desire for Anton, even though she suspects he’s hiding a secret even darker than his affiliation with an outlaw MC. As for Rogue, no matter how much he tries to refuse the scorching need he has for Kimber—as much as his duty depends on it—he’s powerless to deny his rising feelings for her. And when a blindside by an enemy he once trusted puts Kimber’s life at risk, Rogue’s tarnished honor is put to the ultimate test.

“Where you off to, Rogue? Use some company?”

Bobby happened to be the one Devil Anton could say he actually liked. He placed the cap on his head and buckled it beneath his chin. “Not today, Preacher. I’m going north for a few days. You tell Tank I’ll be back in about a week. If he needs me, he can call. I’ll be a day’s ride out.”
He scratched his whiskered chin. “I doubt he’ll be too happy to hear you left these boys on their own.”

“They aren’t fucking kindergartners. You tell them boys if they give me cause, I’ll give them a beat down when I return.”

“What do you want me to tell Tank?”

“I don’t give a fuck. For all I care, you can tell him I have a piece of ass I need to attend to.” Which brought one woman to the forefront of his mind.

All legs and tits large enough to make a grown man’s mouth water.

He always had been a breast man, and Kimber certainly had more than her fare share. Pillows from heaven. Too bad she’d no doubt rather take on a pit of vipers than bed his sorry ass again.

He shook his head at the injustice.

Being Mr. Nice Guy had gotten him on the fast track to nowhere.

His former best friend hated him and had mated with the one woman Anton thought he could be happy spending the rest of his days with. Tamera Cantrell, though, wasn’t meant for Anton as much as he might’ve envisioned at one time. She belonged with Grayson “Gypsy” Gabor, no matter how much Anton had hoped otherwise.

Which brought him back to Kimber James.

The last time Anton had seen her, he had all but run her cute little derriere out of his house, while she cursed the ground beneath his feet. The motorcycle cut he wore over his white tank weighed heavy, damning him for the very thing she detested.

Her parting words mocked him. “Too bad. I really thought you might be one of the good guys.”

Yeah, well so did he. Anton turned the key to his motorcycle and gassed the engine. With a final nod to Bobby, he turned the big bike around in the parking lot and aimed it north. With any luck, he’d leave California behind in a few short hours and be back on familiar turf.

First stop? The Blood ‘n’ Rave. He could certainly use one of the blood donors the barkeep, Draven, had hand selected for the secret society that fed the Sons of Sangue. He’d have to use the back door to keep any of his fellow MC brothers from seeing him. Even though his entire life at the moment was a ruse, the rest of his brothers actually believed him to be a traitor.

Tightening his hands on the rubber grips of his sixteen inch ape hangers, he pulled back on the gas and buried the needle of his speedometer. The taller handlebars aided in a more comfortable ride for someone of his height. Comfort was certainly key with the long ride he had ahead of him. Anton planned to lay his head on his pillow at his farmhouse on the coast before the sun rose over the Pacific. 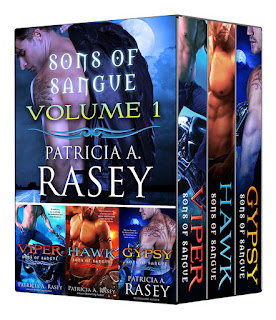 a Rafflecopter giveaway
Posted by Kimberly Rocha at 8:41 AM