AGAINST THE ODDS by KAT MARTIN 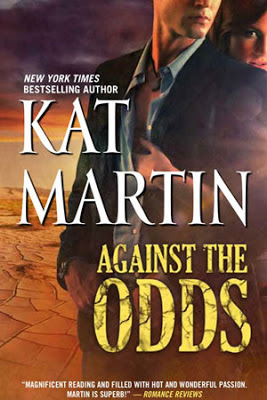 OUT NOW BY THE AMAZING KAT MARTIN

THIS CASE MAY PROVE TO BE TOO HOT TO HANDLE

There's silver out there: Sabrina Eckhart is sure of it. And when she finds the hidden mine on that big piece of West Texas desert, all of her financial problems are solved. That is, if she can find it. The man with the skills she needs is private investigator Alex Justice─a former navy fighter pilot and a current pain in the neck.

When mysterious "accidents" start to plague their search, it seems Rina's multi-acre inheritance might be more of a curse than a blessing. And yet, there's still something sensual about the heat...his arrogance...her stubbornness...being thrust into each other's arms by danger...But the vultures are circling, and if they don't watch their backs, the relentless desert sun could be the last thing they ever see.

A bit about writing the book from KAT MARTIN

The book was interesting to write, a different kind of story that deals with survival in the harsh, inhospitable desert, family betrayal, and long-buried secrets.  The characters had to overcome stereotypes and learn to trust and love.Alex and Rina are two of my favorite characters, so different on the surface, yet oddly suited.  Though it takes a life-and-death struggle before they begin to see the truth.

AGAINST THE ODDS, by KAT MARTIN
EXCERPT

Rina’s adrenaline was pumping.  The thrill of being so high in an open-air helicopter was a rush unlike anything she had ever felt before.  Add to that, flying with Alex Justice, watching his long-fingered hands work the controls, seeing the capable way he handled the machine, made her heart rate soar even higher.  There was something about a man taking charge, a man who was good at what he did, that turned her on.
Not that she would ever admit it.
Alex wasn’t her type and she wasn’t his and both of them knew it.  Still, she wasn’t dead and Alex was definitely eye candy and more.
She forced herself to concentrate on the search they were making.  They’d been flying for more than an hour, had located the property but not the mine itself--assuming there was one.  There’d been nothing in the will to indicate its location or anything about it.  Just the legal description of the land itself, three-thousand acres, five-square miles, of what appeared to be dirt, rocks, and cactus.
Her gaze followed the contours of the property.  Ravines scarred the landscape, and ridges of granite rose out of the sloping desert floor.  Chaparral, mesquite, and scrub brush dotted endless stretches of rocks and sand.
“Not much out there,” Alex said above the whip, whip, whip of the rotors.
“We haven’t covered that much area yet.  Maybe we’ll find something that marks the mine.”
“If there is one,” Alex said, reminding her there might not be anything more than exactly what they were seeing--miles and miles of vast, empty desert.
The hours began to blur together.  Once they had reached the property location, Alex had begun searching in a grid pattern to cover as much of the area as possible.  The temperature was rising, the heat building inside the chopper, the afternoon slipping away.  Rina yawned and rubbed her eyes, which felt gritty from the wind and heat.
An odd noise caught her attention.  The whop, whop, whop had been so regular she’d been trying not to fall asleep.  This sound was different, a kind of grinding that had her gaze shooting to Alex, who features suddenly looked grim.
Sabrina’s heart stalled and a few seconds later, so did the engine.


RTBook Reviews"Martin just keeps getting better and better! Her characters have more depth, and her plots are more sinister, as the Against series continues. Set in the sizzling desert of Texas and rife with mystery, intrigue and twisted family secrets, this entry is sure to earn a spot on any fan's keeper shelf."


COMMENT TO WIN A COPY OF KAT MARTIN'S  ~AGAINST THE ODDS~