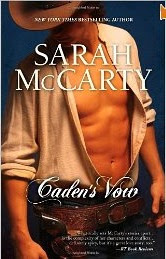 The men of Hell's Eight have begun to settle down into comfortable and happy lives with wives and children, but Caden Miller itches for action. He watches each of his friends fall at the feet of their women and he cringes at the thought of that happening to him.He decides he is going to restore Shadow's wife, Fei Yen's claim and search for lost gold.

Maddie O'Hare has had a ghastly existence being forced into prostitution at a very young age and having been abused most of her life. Rescued from the brothel by Hell's Eight, her saviors take her back to the ranch and make her own of their own, but Maddie has issues. She often withdraws into herself and has many at Hell's Eight believing she is beyond repair, but not everyone. Maddie has had serious feelings for Caden since her rescue as he treats her with the respect she has never had in her life. In fact, Maddie is in love with Caden even if he has no clue.

When Caden breaks his promise to Maddie about not leaving Hell's Eight without saying goodbye, she is bereft at his dismissal. When Sam's beautiful wife, Isabella confronts Maddie about her feelings for Caden and the fact she knows Maddie is not a lost cause, Maddie realizes she must go after what she wants if she is to ever be happy. When she follows after Caden and is captured by Hell's Eight nemesis Culbart, Caden sets upon rescuing the damaged girl only to find himself in a shotgun wedding with her perpetrated by Culbart.

The honeymoon however is far from a delight, as Caden cannot bring himself to take advantage of the ill-used Maddie and she can't put aide the fact that she was a whore for most of her life. These two struggle with the darkness that threatens to poison their lives.

After having mixed feelings about Shadow's Stand I was so happy to finally read and enjoy Caden's Vow by Sarah McCarty. This book gets back to the meat of the very series and the depth of the stories of each of its characters. Maddie being hurt so much in her life makes the reader only want the best for her, and it makes her journey to find herself so rich. Maddie's ingenuity and need to survive makes her one of the most intriguing heroines of this series. Caden Miller,  or resident Irish boy feels the need to fulfill a promise he made upon his father's murder, but this quest could very well break him. Caden's Vow has brought back my confidence in Hell's Eight and now I am eager for the continuation.

Arc provided by Netgalley and Harlequin