MY HIGHLAND LOVE by TARAH SCOTT 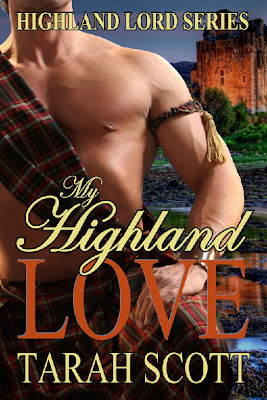 After being nearly strangled by her husband and washed overboard her ship, American born, Elise Kingston awakens on the shores of Scotland and is taken in by the the MacGregor's. She has become quite endeared to the elder, Laird Cameron and becomes one of their own, so to speak. When the prodigal son, Marcus MacGregor returns to Scotland and sets his eyes upon the widow, Elise, his thoughts of remaining a widower are dispelled as he sets out to woo the reluctant woman. Elise is a woman of many secrets and she attempts to keep Marcus at bay in order to keep all of her dark secrets hidden.

Marcus MacGregor is a persistent one in his pursuit of the American , but he knows she is not being completely forthcoming about her past. In addition, his neighboring clan, the Campbells, begin a reign of trouble that includes attacking MacGregor women and even kidnapping. Marcus has a lot on his plate, but he never has Elise far from his mind and his heart. Even if in her infinite wisdom, Elise finds her defenses dropping, but will Marcus' assault on her very being be enough to shake some sense into the love wary Elise?  Can Marcus protect Elise as he promises her, and will she even accept his protection? You know you are going to have to read My Highland Love by Tarah Scott to find out the answers to those questions, and you definitely should!

As my reader friends know, I am a sucker for a good Highlander book. Not just any Highlander book will do though, it must have a good story, and My Highland Love by Tarah Scott is a great story. I like the fact that Elise is not some wayward, whiny virgin, she is a woman with a past, a woman with her tragedies that make her evolve into the lass that Marcus comes to love. I adore Marcus being an older man with an 18 year old son and loads of responsibilities. This is my first venture into reading Tarah Scott and I am very pleased with those results! She has found herself a new fan and I have begun reading her back-list. I highly recommend My Highland Love by Tarah Scott. I really enjoyed it and I am sure you will as well!

4 Stars (Brilliant)
Posted by Kimberly Rocha at 7:00 AM