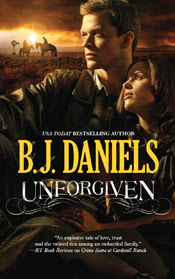 Even eleven years after the murder of Ginny West, the town of Beartooth, Montana still reels from the unknown, especially when suspected murderer , Carson Grant returns home. Carson and Ginny had been an item before her gruesome death and even though no evidence pointed directly to Carson, many in the small town believed he was getting away with murder. Carson's sister Destry was his staunchest supporter. At the other end of the spectrum was Rylan West, Ginny's brother and the love of Destry's life, who believed completely that Carson was to blame for his sister's death.

Not being able to live in Beartooth any longer with constant reminders of Ginny and her demise, Rylan leaves town and stays away for all this time, returning shortly before Carson, who was sent away by his influential father WT. Throughout this entire time, Destry has been holding down the fort, so to speak. She has been practically running her father's ranch , the W Bar G, even as WT dislikes the thought of Destry working the ranch. The two never saw eye to eye on that and many other matters and WT's cool indifference for his 28 year old daughter has left an ache in Destry, who often wonders what she has done wrong.

At Sheriff Frank Curry's behest, Carson is back in town to answer some questions about the eleven year old cold case and arrives with a surprise fiancee, which angers his father, WT. Once word gets around that Carson is back, old animosities that were carefully hidden for the passed decade, rise once again to create turmoil in the otherwise quiet town.

Separated after the murder, Rylan and Destry try to put aside their feelings for one another, as they both are still in love with the other, but that bone of contention called the murder of Ginny West, hangs overhead preventing the pair from finally being happy. Now with new evidence,  Destry and Rylan attempt to sort out the facts of the murder and their relationship. Rylan still believes Carson is to blame but when said evidence says someone else is in the mix here, Rylan begins to doubt all himself and the belief that Carson is the murderer.

UNFORGIVEN is B.J. Daniels at her finest. I used to read mystery ad suspense solely in the past, but virtually gave up on them when they all became so predictable. Guess what? I'm back! B.J. Daniels had my head spinning with suspects, second guessing myself constantly at who done it. In addition, Ms. Daniels has a way of giving you the inside on all the players in Beartooth and making you a part of its community. I felt right at home with her colorful cast of characters like the general store owner, Nettie, who is the town gossip. You either love Nettie or you want to smack her, which I would have liked to have done several times. We all know someone like her. Every little back story added to the whole and I cannot wait for more. I highly recommend UNFORGIVEN by B.J. Daniels. I loved it and think you will as well.

COMMENT TO WIN A COPY OF
UNFORGIVEN BY B.J. DANIELS

a Rafflecopter giveaway
Posted by Kimberly Rocha at 3:37 PM