Excerpt #2 of ~THE TEMPERATE WARRIOR~ by Renee Vincent 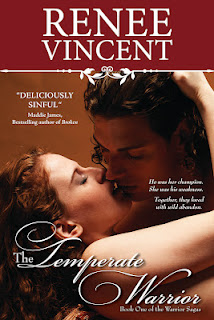 Excerpt #2:
Gustaf had only one thing on his mind—well, many enticing thoughts, truth be told—but they all involved getting his hands on Æsa.

By the time he caught up with her, she was standing at edge of the water, the roaring sound of the waterfall competing with the thrum of his racing pulse. She had unraveled her braid and was making quick work of the two cloaks around her shoulders. Her wavy locks hung down her back, almost reaching the captivating curve of her hips.

When she turned to hang her cloaks over a nearby tree limb, she froze and locked eyes with him. Her breath could be seen on the brisk morning air as well as the tautness of her nipples through the thin fabric of her tight-fitting kirtle. He swallowed hard, imagining the taste of her favors, eager to lave the hard peak with his tongue and suckle as much of the soft globe as he could fit in his mouth.

Unable to stand there any longer, he strode toward her, his eyes drinking in her sumptuous curves. His hands automatically reached for her narrow waist and jerked her body into his before he crushed her against the tree. She whimpered under his assault and braced her hands on his chest, her meager attempt to hold him back inciting him that much more.

The voice in his head interrupted the rush of blood coursing through his veins. You are losing control again. Get a hold of yourself.

It took everything he had to release her. His legs shook beneath him as if they were mere saplings trembling under the brunt of a forceful wind. Stepping back, he stood before her disoriented and flushed beyond all reckoning. “’Twas wrong of me to follow you.”

“Why? Because your excessive desire for me outweighs your commitment to getting your men home in a timely manner?”

Gustaf took a deep breath. “There is that. But ’tis not the only reason.”

She approached him in the most seductive way, eyeing the expanse of his shoulders as she unlatched the brooch at his right. She removed his wolf-skin cloak, the chill of the invigorating air doing little to douse the raging fire in his loins. He left his arms dangling at his sides, fighting the urge to touch her, to grab her with both hands and press her curvaceous warmth to his rigid body.

She draped his cloak over the limb beside her and returned her attention to divesting him of the other adornments strapped to his body. Her eyes gazed at the bulge rupturing his breeches as she unbuckled his belt. Leaning his scabbard against the trunk, she licked her lips and cupped his bollocks in her palm. “What is it you fear, my lord? You can tell me.”

Her whispered words, falling from the alluring pout of her luscious lips, stroked him as soundly as if she’d dragged her fingertips over his bare flesh. “I want you. More than I wanted you yesterday. And with each passing day, my hunger for you grows in fiendish proportions. I want to ravish you, Æsa. I want to feast on you and feel you quiver beneath my tongue. I want to spread you wide and thrust deep within you as you call my name. I want to hold you down and for once,” he said, clenching his teeth, “just try to sate my appetite for you, though I know better.”

Perhaps he’d disclosed the list of his objectives in an effort to make her think twice about provoking the feral beast within him. The corner of her lip, marked with mischievous intent, hitched upward and he knew he’d failed to discourage her. In fact, he realized he may have provoked his own bewitching beast in the form of sweet femininity.

“Does time allow us to partake in such wanton acts,” she taunted, stroking his erection through his breeches.

“Time is not what concerns me, Æsa. ’Tis what will happen next once I get my hands on you.”

“Then touch me not.”

He stood helpless as she touched him. She slipped her hands beneath his tunic and splayed her long fingers across his abdomen. She skimmed over every ripple of muscle in his stomach and climbed each rung of ribs in his torso in the most deliberate fashion, making it that much harder for him.

When her fingertips grazed his chest, she sought through the thin layer of his curls and found that his nipples were just as taut as her own. Unmercifully, she stroked her thumbs back and forth, pressing her pelvis into his groin.

Æsa gazed at him as he clutched the tree limb for stability and tried to gather his wits. “It seems you have just as much difficulty being touched as you have touching me with your own hands. Perhaps ’tis best if you watch.”

He stared at her as she inched her kirtle higher and higher. First her shapely calf took form, then her knees, then the outward curve of her creamy thighs. Gustaf’s throat felt dry and constricted. He could barely breathe. “Æsa, please.”

Any subtlety she utilized before now perished as she lifted the fabric over her head and discarded it on the ground. His eyes swept over her naked body. The mesmerizing sight of her full breasts and rose-colored nipples drew most of his attention.

She walked backward toward the stream and allowed him all the time he wanted to stare shamelessly at her private parts. With each slow step, she tortured him, luring him to follow lest he be out of arm’s reach of the tempting favors she offered.

He knew why she was doing this. She wanted the man who could not hold back. She wanted to prove she was woman enough for all of him, that no matter how unruly his primal urges became, she would suffer the wicked pleasure of his total abandonment and reap every blessing she hoped to gain from it.

Foolish woman. Did she not understand how difficult this was for him? Did she not truly comprehend how crazy passionate he could be when thrown into a wolves’ den? He recalled her reference to punishment and pleasure. For him, the fine line was drawn between love and rage. Just as he’d gone berserk over the men who’d killed his father, he knew the compulsion for losing control in the heat of rapture was not far behind—especially where Æsa was concerned.

He’d never loved a woman as much as he loved her, and the feelings bubbling up inside him when he was on the brink of release was nigh the same as the fury he encountered in past battles. He was a dangerous man in either of those combustible situations, and Æsa was perilously playing with fire.

Unbeknownst to him, his foot lifted and stepped forward. He tried to stand firm, to keep his other boot planted, but he was drawn by forces more compelling than his own might. More definitive than his own fears. The need to have Æsa close, the need to feel her smooth skin and buxom body in his grasp, preyed on his mind until he had no choice but to close the distance between them.

If she wanted the man who was not so temperate, then she was about to have him. There was no turning back if he set this animal free. With his concern of going too far in the forefront of his mind, he kicked off his boots and ripped his tunic over his head. Inwardly, he’d made a deal with himself: he’d surrender to Æsa’s desires and forsake his reluctant tendencies as long as he brought her pleasure. If he thought at any moment she was second-guessing her plan of unfettering the temperate warrior, then he’d pull away.

He only hoped he could.

As he unlaced his breeches and stepped out of them, his heart pounded against his ribs and he felt as if his chest was expanding to the point of hyperventilation with each ragged breath he took. He snatched the pile of draped fur cloaks from the limb, slung one of them across his shoulders, and raced to the water’s edge to meet Æsa. He skidded to a halt in front of her, his body inches from hers.

She stood stock-still in all her naked glory. Goose bumps flourished across her porcelain flesh and her lower lip quivered from the cold. He gazed at her one last time before swathing her in her own cloak and pulling her close. The cool flesh of her lovely breasts smashed against the warmth of his, her glinting eyes heavy-lidded with lust. She tipped her head back, holding his gaze as she snaked her dainty, chilled arms around his back.

As automatic as breathing, he reached up and brushed his thumb across her shivering lower lip. “When I am finished with you, you will be trembling for a whole different reason.”

He wound his arms around her middle and cupped both hands firmly on her backside, hoisting her higher so her delicate womanhood would feel every throbbing inch of him. “I swear on Thor’s hammer that no one will love you more than I. Or as fiercely.”

Renee Vincent
(Historical & Contemporary Adult Romance)
From the daunting, charismatic Vikings, to the charming, brazen Alpha male heroes of modern day, you'll be whisked away to a world filled with fast-paced adventure, unforgettable romance, and undying love.
Visit my website at http://www.reneevincent.com/

Posted by Kimberly Rocha at 2:23 PM