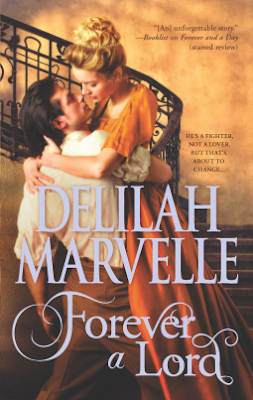 Before Delilah Marvelle, I am going to say that I really was never interested in reading books that took place during the Regency time period. Just something about this era never caught my eye, until of course I picked up her book Forever and A Day and began my love affair with all things Delilah Marvelle. The second book, Forever a Lady, cemented my faith and Forever a Lord makes me giddy with excitement.

Forever a Lord begins with the 10 year old, British Lord, Nathaniel Atwood's abduction in New York in 1800. Circumstances surrounding Nathaniel's kidnapping were very mysterious as Nathaniel was kept in captivity for five years, and once released from his cellar prison, he did not seek his family out in London, but remained in New York basically living on the streets. Nathaniel, now known as Coleman, always knew that his own Father was to blame for his abduction and wanted nothing to do with the Atwood family once he was freed. The thirty odd years since the crime, Coleman has become a boxer, depending on his own brute strength and street smarts to help himself and the poor community of  Five Points survive.

When Coleman/Nathaniel discovers that someone is actively looking for the whereabouts or information on the young missing and presumed dead Lord Atwood, he decides to take a chance to help the people of Five Points by attempting to exchange information for funds. His plans backfire when he is told by his brother-in-law, the Duke of Wentworth, of his sister's death and unable to withhold his emotions of her loss, is outed as the missing Lord. His brother-in- law and nephew try to convince Nathaniel to return to England to reclaim his position in London society, but Nathaniel at that time is not prepared for that.

In London, the Lady Imogene Norwood struggles daily with her own independence. The nineteen year old beauty lives off the pity of her brother's cheating wife and her brother's own guilt of not being able to protect her after their parent's deaths. When her brother Henry tells her he is in need of money for a divorce from his unfaithful wife, he and Imogene come up with a plan to represent a boxer and win a championship with a quarter of a million pounds for the winnings.

Now, almost a year after his initial meeting with his brother-in-law, Nathaniel has come to London and is once again surviving by boxing. He still has not let anyone know he is in England and is devising a plan to kill his own father. Once discovered boxing by Henry Weston, Nathaniel is given a proposition by  Henry and Imogene. The brother and sister would champion Nathaniel for the famous boxing match if he marries Imogene, but in name only. You see, Imogene has found out that Nathaniel has issues with skipping out on his investors and she concocts the marriage as the only way to keep Nathaniel in check. Warily, he accepts the offer, but the "in name only" marriage is quickly trounced when Nathaniel insists that he be able to bed his wife whenever he fancies, and mind you, Nathaniel's bedding is rather unconventional.

With the heir to the Atwood legacy back in London, society is all atwitter with the events surrounding Nathaniel, his boxing career, his marriage and his family. Will the secrets surrounding Nathaniel's abduction come to light and ruin  the Atwood name? Will Imogene convince Nathaniel to remain in their marriage. Will Nathaniel ultimately win the boxing championship and set to rights all the hardships he has come across in his life? You will have to read Forever a Lord to find out the answers to these burning questions.

What can I say about Forever a Lord? Well, I can first say that it's become one of my favorite books. Delilah Marvelle is a brilliant writer with her talent for intertwining romance and the darkness in people's natures. Ms. Marvelle has a gift for making the reader succumb to all the main character's issues and desires. Forever a Lord is a magnificent continuation to the already amazing Rumor Series. I love that no character in her menagerie is conventional but utterly memorable. I eagerly await the next installment of the Rumor Series by Delilah Marvelle with extreme anticipation! Of course I recommend this book to all. I loved it and I know you will as well. Thank you Delilah Marvelle for making my reading experience so right!


Here is the fabulous book trailer for FOREVER A LORD by DELILAH MARVELLE!!!

Posted by Kimberly Rocha at 7:05 PM