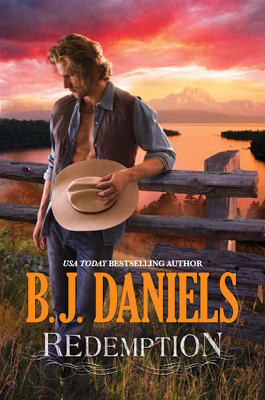 One thing you can be assured of when you pick up a B.J. Daniels book, is you are in for one wild ride. Action-packed and chock full of suspense,  B.J.'s books always have the reader sitting on the edge of their seats gnawing on fingernails. as is the absolute case here with Redemption, the second book in the Beartooth Montana Series.

Once again we are in Beartooth, Montana. Jack French has just gotten out of jail after spending two years in Ranch labor for bull rustling, although Jack insists he did not commit the crime, that in fact he was set up. Jack returns to his old town of Beartooth to mostly familiar faces, but one new one, the new owner of the Branding Iron Cafe, the mysterious Kate LaFond. He hasn't decided yet whether he plans on staying in the town teaming with memories. The solitary and attractive Kate LaFond is a font of secrets just waiting to be discovered by the conflicted Jack, who is torn between staying on the straight and narrow or seeking revenge for whoever had him set up to go to prison.

When Jack comes across Kate for the first time, she is being accosted by a man in back of her cafe, and Jack reluctantly steps in to protect Kate, who insists she needs no one to protect her. Trouble seems to come to Kate's doorstep  which has Jack stepping in as her savior again. As much as Kate tries to deny, she begins to have feelings for Jack, but her inability to be honest with him puts a roadblock that prevents a relationship from happening.

Beartooth's trustworthy Sheriff,  Frank Curry has his own set of problems in the form of a dead body found by the river. This body does not bode well for any in Beartooth. While investigating the crime, Frank stumbles upon a photograph that will have key information. With the help from his former love and town gossip, Nettie Benton, he finds that writing on the back of the photo may be a map. Can this be a map for the treasure Kate is set on finding? While trying to make heads or tails of what's going on in Beartooth, Frank's past begins to catch up with him in the form of a seventeen year old girl named Tiffany Chandler, who rents a room above Nettie's general store. Tiffany comes with a whole set of issues that will shock the normally unshakable Sheriff Curry.

I did not put REDEMPTION down until I read the entire book. I loved it as I do all that author B.J. Daniels writes. She has this unique ability to astound the reader continually with her mystery and suspense.This book was mainly Jack and Kate's book, but I loved  B.J.'s  secondary story line with Frank Curry and Lynette(Nettie) Benton. They are hands down my favorite characters in Beartooth and I want them to have their day in the sun. The Beartooth Montana Series has become one of my favorites. One thing about this town called Beartooth, at the foot of the Crazy Mountains, is there's always something going on, but the inhabitants always end up taking care of their own.

I highly recommend taking this roller-coaster ride of REDEMPTION which is suspense at its best by the Queen of Western Romantic Suspense, in my eyes at least, B.J. Daniels..... 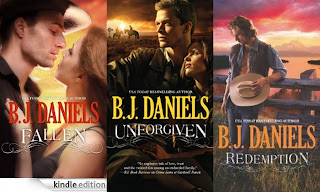 Posted by Kimberly Rocha at 3:25 PM