THE RELUCTANT COUNTESS by WENDY VELLA 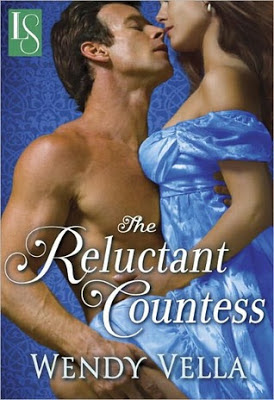 Patrick "Colt" the Earl of Coulter, thinks that the beautiful Sophie, Countess of Monmouth is a fraud and he intends to expose all of her secrets. Recently widowed, with a young son in tow, Sophie worries on a daily basis that she will be discovered, and attempts to keep herself at a distance to the aristocracy in London to the dismay of her sister-in-law, who wants to show her off. Nonetheless, there is an instant attraction between these two that becomes explosive quickly and confuses both the Earl and the Countess.

When Sophie begins to receive messages of a threatening nature, she shies even further away from any relationship with the Earl, fearing that when her background comes to light he will toss her away in disgust. Until one night, that threat becomes a reality and little Timmy is kidnapped and the only one Sophie thinks that could help her turns out to be Patrick. From this moment on, there is no turning back for the wayward Sophie, who struggles with her past and present every minute of the day.

When Patrick discovers who Sophie really is, he does the unthinkable, he helps her, proving Sophie wrong on so many levels. Through this life-altering event, Sophie begins to trust the Earl of Coulter and he beings to open his heart to the unusually strong Countess. Patrick's own strict and cold upbringing made him believe that love was an illusion until he sets his eyes on the mysterious Sophie.

The Reluctant Countess by Wendy Vella, is a great  story that shows that love surpasses all class stations and cannot be overcome. Sophie is a strong female, but also innocent with all that goes on around her. She constructs a chilly wall of indifference to attempt to show the world that what they say about her makes no difference, but Patrick sees right through that wall and has compassion for Sophie's plight, even though she isn't all she is made out to be. I really enjoyed this story and I do look forward to other books by Wendy Vella. The Reluctant Countess is a strong story with a feel good ending and a story of hope.

EArc given by Netgalley for an honest review.