PRISONER OF DESIRE by MARY WINE 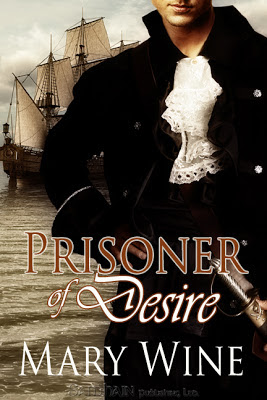 England: When the mother of Lorena St. John and her two younger sisters passes away, leaving the three girls at the mercy of their cruel stepfather, they all learn though bitter disappointment and hard work, that life is not all that it is cracked up to be. Instead of the pleasant and loving existence they knew while their parents were alive, they now live a dreary and hard one with their stepfather, Geoffrey Godford, rules his home with an iron fist using his step-daughters like servants.  About a decade later, when Lorena is twenty-three, she is told by her stepfather, that he has arranged a marriage for her to a British officer and will leave the only home she has known, for Bermuda, where she will be wed to Commissioner Adam Mordaunt, who has brokered the match with Godford.

Boston:  The Rawlins family is a shipping magnate, born and bread on the ocean with their progenitor, Sebastian being a former pirate. The handsome sons of Sebastian and Brigitte all sail for a living and are just as at home on their ships as they are at hearth and home in Boston.  Captain Warren Rawlins, the eldest son loves his ship, the Huntress, and while he is much sought after with the local ladies, he shies away from the forbidden "M" word. When Warren's younger brother Garrick captains his own ship, the Golden Dawn and takes the youngest, Harrison trouble abounds when the Brits attack and take the Rawlins men captive to the island of Bermuda, where the cruel Commissioner Adam Mordaunt rules his penal colony like a slave master. When Captain Warren Rawlins discovers his brothers and some crew are taken prisoner, and the Golden Dawn left in a wreck, he swears he will rescue his brothers by any means necessary

After weeks at sea, Lorena St. John arrives in hot and sticky Bermuda to a dismal reception by her husband-to-be. Commissioner Mordaunt leaves Lorena to wander the island as punishment for not obeying his orders upon their first meeting. On the island only a few hours, Lorena is taken captive by Captain Rawlins as an assurance his ship and his men will not be harmed by Mordaunt when Warren frees his brother's and the other men. Instead of finding a simpering female who cowers in fear, Captain Rawlins discovers Lorena St. John is a woman like no other, and once caught up in his sails, so to speak, Lorena has a difficult time making heads or tails of the larger than life American, because once she realizes she is free from an unwanted marriage to the savage Mordaunt, she wonders if she is better off staying unmarried. Once Warren realizes Lorena is the catch for him, he is relentless in pursuit of her hand as well as her body.

Once again Mary Wine sucks me in with her strong female character. Lorena is a strong and occasionally stubborn woman and I adore her. Along the way, she learns to adapt to any situation she is in with her wits, not with tears. Warren is a dreamy character with his gentlemanly attitude one moment to the fierce Captain the next. I love how Mary Wine shows the stark contrast between the young, new America and the old and stiff British culture. This story was well told with action and adventure. Now all I need is a sequel!!!! I highly recommend Prisoner of Desire by Mary Wine. I wish more people knew about her work because she is such a great writer.