WHEN SHE WAS WICKED ( A Honeycote Novel ) by ANNE BARTON 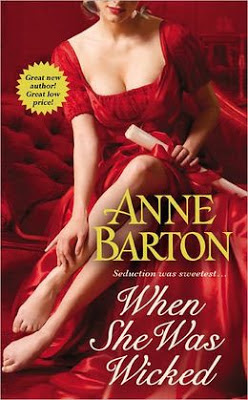 Miss Anabelle Honeycote needs to supplement her meager income as a seamstress in a dress shop. Her mother has been stricken with an illness and the pittance Anabelle receives does not cover the medicine and care. Her position as the seamstress puts her in a very advantageous place to hear lots of juicy gossip about the aristocracy in London, and if some of this gossip got out, it could ruin some reputations. In order to help her family, Anabelle has taken up blackmailing some of the objects of the gossip. Things were going moderately well in that department until she is caught by Owen Sherbourne, the Duke of Huntford, who basically gives Miss Honeycote an ultimatum, jail or working for him. The proposition of designing and sewing wardrobes for his beloved sisters is just too hard to pass up, especially when the Duke throws in that he will take care of Miss Honeycote's mother and sister.

The handsome Duke has Anabelle move into his home while she fulfills her end of the bargain, and in the meantime becomes enchanted by the oblivious to her allure seamstress. Alas, Anabelle's station in life is just too far below the Duke, as he knows he must marry someone who on his own level, but he he just can't keep his hands to himself and begins a whirlwind secret affair with the seamstress. Even after he discovers that Anabelle is the granddaughter of a Viscount, he still in denial that a relationship could be possible.

Anabelle has no illusions, even with the temptation of Owen. She knows that once her job is done, she will fade into the background of anonymity. For the first time in her life, she has friends of sorts, as Owen's lovely sisters, Olivia and Rose immediately take to Anabelle. The sisters have not had an easy time of it as their mother ran away, causing a scandal, and their distraught father does away with his own life. These incidents leave Rose a mute and Owen wracking his brain at how to help her. In the weeks that Anabelle lives with the Sherbourne family, the affects they have on each other are astonishing, especially in the transformation of the working class Anabelle, into the beautiful companion of Rose and Olivia.

This touching story is a revelation that love can overcome all differences once one's eyes are open. I become more and more attracted to the stories where the females are strong and can stand on their own, instead of the simpering lady, backed into a corner. This first book in the Honeycote series by Anne Barton is a wonderful story with interesting characters. I look forward to the next in the series and definitely recommend WHEN SHE WAS WICKED to all.