Guest Reviewer ~Jennifer Butler~ FIGHT WITH ME by KRISTEN PROBY 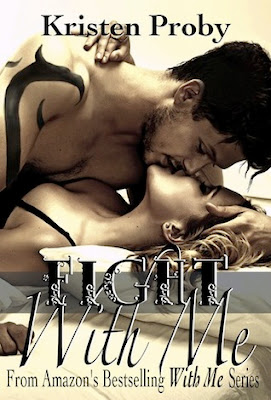 Fight With Me by Kristen Proby
I've read so many books and it takes a great deal for a book to really stand out to me. Fight With Me is one of those rare books. Hands down, this book is my favorite in the series and one of the most enjoyable books I have read in a long time.
Julianne Montgomery is an investment banker that is best friends with Natalie from Come Away With Me. Jules as she likes to be called slept with her boss Nate McKenna and has spent the past eight months trying to ignore him and the feelings she has for him.  Nate can’t forget the one night they spent together and finally decides to make a move on Julianne. He asks her to work late one evening with him. Jules is in for quite the shock when he asks her to spend the weekend with him, not working!
This book starts off hot in the first chapter, really the first paragraph and keeps going the entire way through. I couldn’t put it down. I don’t think I have read a character like Nate that has so many sides to him; the successful business man, bad boy (there is just something so sexy about a guy that has tats under his conservative suits), former fighter, romantic boyfriend.  He is such a sweetheart, everything he does with and for Julianne is so romantic. I like that Jules is portrayed as a successful in her career as well as being a beautiful woman.  She is an intelligent woman with a very girl side. The chemistry between the two is explosive! The two of them on the motorcycle is…oh god (I think I have to read it again). There is just the right amount of drama in the book to make you gasp and whole your breath until you find out what happens next. Jules and Nate have to navigate through their personal life while keeping it secret from their work life.
The story continues to bring back previously introduced characters (Luke/Nate and the Montgomery Clan) to create a really well rounded story. I am anxiously awaiting the next story in the series which is supposed to be Jules’s football playing brother William Montgomery!
~ JENNIFER ~
Posted by Kimberly Rocha at 7:49 AM