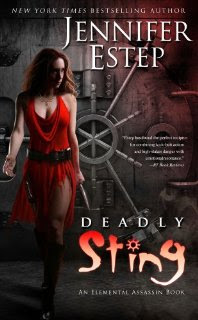 Jennifer Estep has a talent for packing a lot of action into a short period of time as occurred in prior books in her Elemental Assassin series. In this latest chapter in the life of Gin Blaco, also known as the assassin the Spider, Estep keeps that going.  Gin is talked into attending the high society social event of the summer, the showcasing of former fire elemental mobster Mab Monroe’s art collection, at Briartop, “Ashland’s largest, fanciest, and most highfalutin art museum” by her foster brother, Finn.  Gin and Finn no sooner arrive at the tony affair when trouble explodes, with Gin and her friends right smack dab in the middle of it. A group of thieves disguised as waiters and security at the museum gala corrals all the guests, minus Gin Blanco, as hostages and begins to collect all the hostages’ valuables as well as the art treasures in the museum. Much fighting, bloodshed and mayhem ensues as Gin strives to prevent the thieves’ escape and the further loss of life of the hostages.
In the middle of saving the day at the museum Gin faces her former lover, Owen Grayson again who has asked for a time-out in their relationship following Gin’s elimination of his murderess ex-fiance.  Is the middle of a major art heist the place to talk through their issues?  Probably not.  Estep saves serious talk between the two for later in the book, as well as Gin tidying up punishment for the real mastermind behind the art robbery attempt.
Gin Blanco once again shines through as an assassin with a heart, but also stays true to character with her incredible skills.  Although this time around Gin learns that the strength of her abilities with stone and ice can’t always save the day. Recurring appearances of the major secondary characters from prior books add to the flavor of the story and makes this a great follow-up to the earlier books in the series. The thrilling action sequences and the interrelationship exchanges between the characters made this a great read, one I had to finish in one sitting.

Deadly Sting
Jennifer Estep has done it again; Deadly Sting is another great addition to the Elemental Assassin series. In the 8th book in the series, Gin Bianco is back and so is the Spider! From the moment I picked up the book, I couldn’t put it down. I read Deadly Sting in one day, it was that good.
Gin is attending a party at Briartop that is showcasing Mab Monroe’s priceless collection of jewelry and art. While reluctant to attend Gin gives into her curiosity and agrees to attend the party. She is more concerned with wear to hide her knives then the type of shoe to wear with her red gown, much to Finn’s disappointment. Shortly after arriving at the party, things go from bad to worse in a matter of minutes.  How can Gin fight off a bunch of thieves set on stealing all the priceless jewelry and art and will she save the group of hostages being held in the museum?
Deadly Sting is filled with non-stop action! Finn, Bria and all of Gin’s friends are back for another round of action. There is so much more that I could write but it would give away so much of the book, so you just have to read it yourself.