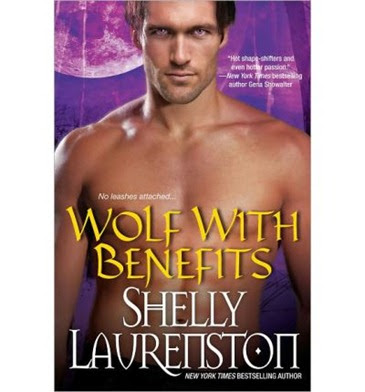 There’s nothing like a good-ol’ boy wolf. And ace security expert Ricky Lee Reed protects, serves, and seduces with all the right moves…But the more he sees of Toni Jean-Louis Parker, the female he’s hired to protect, the more he’s howling for her.

There are so many wonderful things to say about this book. As you can see I gave 6 out of 5 stars, but I would have given 20 out of 10.
We get to visit not only Ricki and Toni, but almost every other couple we’ve been introduced to over the years. In most books you get to hear the voice of the hero and the heroine and maybe one or two other key characters, but in this story you get so much more. She pulls you into the story with humor and drama, giving us a glimpse at characters we love from the past, in their voice that brings back those happy feelings. Now most people couldn’t pull this off and still give each character their own unique personality, but Shelly Laurenston isn’t most people. She has a way with words that have us readers actually laughing out loud with tears rolling down our cheeks. More than once during my reading I had my family looking at me as if I was nuts.
If I was to be asked who my favorite person in the book was, I don’t think I could say for sure. We were introduced to so many new people, but old favorites were in the story too. You get to see DeeAnn do her thing of being scary and skulking, and staring down a hardened criminal with her yellow eyes that makes him embarrass himself and offend the senses of everyone. We got to see Bo being his schedule crazy self and Blayne trying to soothe ruffled feelings after Bo has either beat physically or emotionally. She also lets us revisit Ronnie Lee and her hubby Mace along with many other from the Reed clan including the Reed’s mama Tala.
If I were to name all the voices that get a chance it would take me another page to describe them, so let me just throw out their names. I’ll also add that the glimpse of each character was enough that you remembered each and every quirk they had. You had Jessie and the wolfdogs, Miki, Sara and Angelina, need I say more? Mace and Ronnie along with Reece and Rory Lee. And let’s not forget the Van Holtz pack and Irene.
This story also introduced the Jean Louise Parker family. Not only were they shifters, but they were a rare breed. Toni’s family was a large pack of ten kids who all but Toni were prodigies of some sort. You will fall in love with all the siblings except one, and I won’t spoil that for you, but you’ll have a hard time deciding which one you love the most. My personal favorites are Freddy, Kyle and the twins. Freddy is so darn cute and adorable I wanted to jump into the book and hug him. Kyle had me wanting to shake him and be him all at the same time, and the twins…They scared the crap out of me. And then you get to meet Toni’s best friend, Liv, who I think might actually fit in quite well with DeeAnn, only in a much tinier package.
I honestly didn’t want to finish this book, because then the wait for the next would begin. Usually there is something I could say I didn’t like, or wish was different in most stories, but there is nothing I could say negative about Wolf With Benefits. Shelly Laurenston’s writing stands apart from the crowd with her wonderful mix of humor, romance, and alpha males and females that make you want to be a part of their world.
There should be a warning that comes with all Shelly Laurenston’s books that say in bold letters “Warning…Do not read while drinking anything that you don’t want coming out of your nose.”

6 out of 5 Stars or betterJ