THE ROGUE'S PROPOSAL ( HOUSE OF TRENT BOOK 2) by JENNIFER HAYMORE 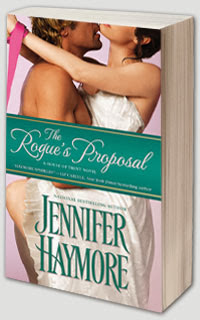 Remember when I was all in a tizzy over the first book in The House of Trent series by Jennifer Haymore? In the Duchess Hunt, the Duke marries the help! Heads were spinning! What a no-no, and guess what? I loved it, because Jennifer Haymore redefined my outlook on romance with that one book. Now on to House of Trent, Book 2, The Rogue's Proposal another delightful tale from this industrious author.

Those readers who have read the first book know that the Hawkins family is chock full of scandal and oddities, but that's what makes them so damned lovable. Our hero in this tale, Lord Lukas Hawkins is a bit of a conundrum. The second son of the House of Trent, Lukas always goes against the grain. Somewhat of a rake he prides himself in his conquests, and this take them and leave them rogue is about to get a rude awakening when he meets Mrs. Emma Curtis.

Emma has been widowed for over a year now, murdered by fiend Roger Morton, who also has stolen Emma's father's entire fortune, leaving the family on the cusp or ruin. Her only chance at seeking revenge on Morton and retrieving her ailing father's fortune is the ellicit the help of Lord Lukas, who's mother went missing with Morton some months before.

When Lukas sees the beautiful widow, he immediately wants her in his bed, but things don't always work out the way Lukas wants, especially where the resourceful Emma is concerned. The two set over running around Great Britain seeking clues to the whereabouts of the villain and in the process find out there is much more than meets the eye with each other. Lukas bears weight of years of abuse that have shaped him into the man he is and when Emma catches glimpses of his darker self, she is determined to right the wrongs done to him in his lifetime.

The Rogue's Proposal is brimming with mystery, deception and awakening. Every character is written to perfection, each with their quirks and redeeming qualities. Luke, as he prefers to be called, takes a journey which includes self absolution for things he felt were his fault when he in fact was the victim. Emma is a strong female heroine who blossoms under the tutelage of Lord Luke and then learns to fight for what she believes in. Along the way we are re-introduced to the Hawkins siblings who will inevitably have their day in the sun  because the matriarch is still missing and the mystery of her absence continues to grow.

I truly enjoyed the Rogue's Proposal, by Jennifer Haymore and I think you will as well. 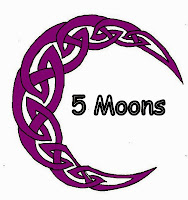