TODAY IS A SPECIAL DAY HERE AT BOOK OBSESSED CHICKS, AS MY SUPER TALENTED FRIEND, PATRICIA A. RASEY, HAS GIVEN ME THE GREAT HONOR OF ALLOWING ME TO PRESENT THE EXCLUSIVE COVER REVEAL FOR THE HIGHLY ANTICIPATED SECOND BOOK IN THE SONS OF SANGUE SERIES: HAWK. WHAT A JOURNEY IT HAS BEEN TO FINALLY GET THE PREFECT COVER TO THOROUGHLY DEPICT HAWK'S STORY. THIS IS AS CLOSE TO PERFECTION AS IT COULD GET. 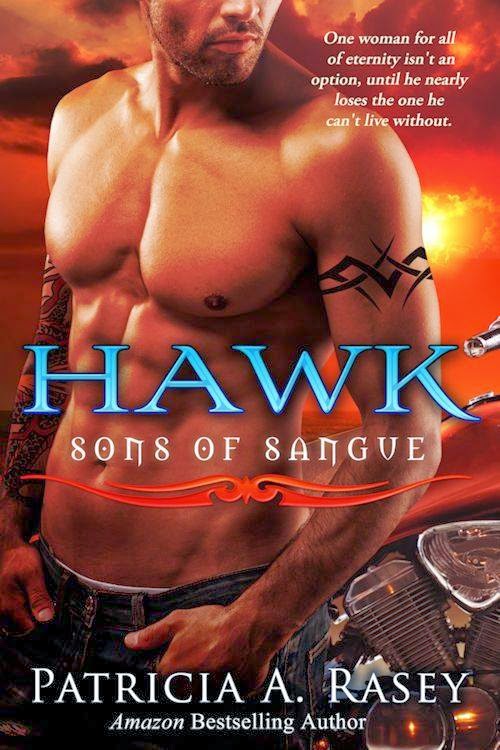 Kaleb “Hawk” Tepes, as president of the Sons of Sangue and descendant of Vlad III, needs to keep his head focused on club business. Trouble is someone wants to divest him of it for a crime he committed against his vampire predecessors. He can’t afford distractions, especially those that come in the form of a five-foot-two sprite named Suzi, who once belonged to his nephew. In a moment of weakness, he makes a snap decision that can only spell trouble. Now faced with the one person who wants him dead, Kaleb must make the ultimate sacrifice or chance losing the only woman he truly desired forever.

Suzi Stevens has tried hard to put her past behind her and move forward. The one man she yearns for over all others, believes her to be nothing but cold-hearted. Hearing that someone has tried to behead him, she shelves past prejudices and rushes to his side, needing to see for herself that he’s all right. What she doesn’t count on is Hawk’s demand to take her as his personal blood donor. Now forced to endure his company, she fears losing her heart for all eternity to the one person who has the power to crush her.
a Rafflecopter giveaway
Posted by Kimberly Rocha at 6:00 AM