CELEBRATING THE PRINT RELEASE OF ENDLESS HEART BY EMMA LANG!!!!!! 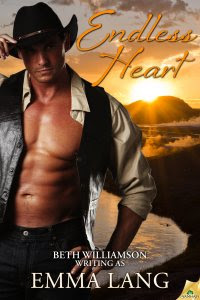 As if Lettie Brown didn't have enough disappointment in her life, she finds yet another one when she meets the freight wagon only to have a drifter vomit all over her only pair of shoes. Lovely. You see, Lettie hasn't had a very good life up until she ran away from her evil husband and started a new life in Forestville, Wyoming with sister of her heart, Angeline Hunter. Lettie and Angeline were members of the LDS community, where the males of the community treated the females like property and sometimes even worse. Lettie had been in an awful marriage and she became a cynical non trusting woman.

Shane Murphy, ex-soldier, current drunk, was a shell of a man. Haunted by his past, he feels undeserving of anyone's help, and meeting Lettie Brown throws him for a loop. Lettie Brown is not one to pity anyone and when she sees Mr. Murphy seems to have had a tough time as well, she understands him.

Both Lettie and Shane have their crosses to bear and are uneasy about revealing too much of their pasts to one another. To top that off, strange happenings occur when it seems that both are having rather lifelike dreams of each other, dreams of intimacy neither has had in their lives. When they take their intimate dreams and attempt to make them reality things become blissful and difficult at the same time. Trust being a fragile topic with Shane and Lettie, may make or break their future.

When we first met Lettie, she came across as a cynical and frightened woman. She had been through so much that it was impossible to see her as anything else. One might even say she was not like-able. Over the series, Lettie grew the most out of any female for me. She went from a former abused LDS wife to helping run the town's newspaper with Angeline's husband, Sam and helping out at the Blue Plate. Although she felt that there was no hope for her ever being in love again, Shane Murphy twists her inside out.

Shane also believes he'll never find love again. After losing his wife and child he becomes hard, resorting to alcohol to numb whatever feelings he may have. Shane is an awesome character. Once he is sobered up and has to face his past, he lets Lettie in. The most unlikely of couples becomes quite apparent.

I loved Endless Heart. It's a gritty and honest story with two people who have their issues. This is a true Beth Williamson story, told the only way she can, with humor and affection for each character. Endless Heart proves that everyone can get a second chance, they just have to open themselves up and take a long look at their surroundings. One of my favorite books this year!