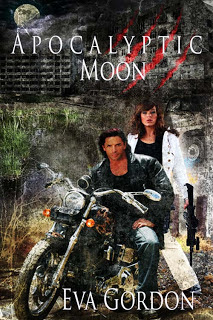 Dr. Dora Adler’s life has been in disarray since the beginning of the zombie apocalypse, but when she gets bitten by one of the undead her whole world is turned upside down. Held captive in a secret underground lab, the tall, muscular hunk in the next cell is her only hope for salvation. Unfortunately, he claims to be a werewolf. Yeah, and she’s supposedly a witch.

Dirk Gunderson is an alpha Arbor pack werewolf. Captured and collared, he’s sold to the zombie lab in hopes his blood serum can create a vaccine. He needs to escape, but not without the hot little brunette witch.

In the midst of enemy werewolves and the hordes of undead, Dirk and Dora’s sexual tension ignites a blaze hotter than the desert highway. Along their journey, they battle the inevitable: a werewolf must never take a witch as a mate.

I’d like to start by saying I was a wee bit dubious if I’d enjoy the mix of shifters and zombies. Ms. Gordon had me on the first page and continued to hold my interest throughout the entire story. The world she painted of life after zombies took over the world was so clearly written I could picture every scene she depicted. I absolutely loved how she introduced so many characters that I am now impatiently waiting to see when her next in this new series is released.
After checking her web page and not seeing a coming soon, I can honestly say I was almost as depressed as when I’ve read one of my favorite authors latest in a series and realized that I now had a year to wait for the next installment. That, in my humble opinion, is a very high recommendation for any reader to go out and buy this book.
It’s not only a full length shifter story, but it has all the elements that make it a great read. Eva Gordon gives you hot alpha men, sexy alpha women (shifter and not), danger, suspense and last but not least smoking hot sex between the hero and heroine.
While she writes some pretty gruesome scenes of zombies being killed and doing the killing, it made the book even more impressive to me. I can guarantee that if you enjoy a long, steamy, action packed story you will love Apocalyptic Moon by Eva Gordon. And if Ms. Gordon is reading this review I would like to beg you to please start writing the next installment NOW. LOL

Reviewed by Michelle Boone
5 out of 5 Stars or betterJ

Posted by Kimberly Rocha at 9:58 AM