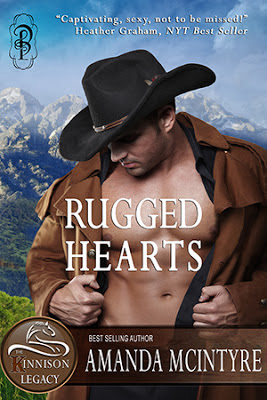 It's the Christmas season in End Of The Line, Montana and Wyatt Kinnison just wants to be left alone. His horse, his dog and his brothers are basically all he needs. When he was a child, Wyatt and his younger brother Dalton were basically dumped by their mother with new step-father Jed when she ran off with another man,  leaving the initial bitter pill towards women that Wyatt has since cultivated after his relationship with local girl, Jessie, who also left him. Growing up with Jed as his step-father, Dalton and Jed's nephew Rein, was actually a very good thing because a better father the boys couldn't have. Christmas-time was a magical season where Jed thought himself the town Santa, bringing cheer wherever he went, but when Jed passed away all the cheer was taken out of it. Wyatt was left in charge of the ranch and the boys and he began to become bitter and a recluse, the opposite of who Jed was.

Enter the new second grade school teacher, Aimee, who is all spunk and optimism. When she appears on Wyatt's doorstep having lost her way back to End of the Line, Montana, Wyatt is surprised by the little package, but quickly dismisses her. Aimee sees Wyatt in town she becomes more and more intrigued with the handsome man and tries to find out what she can about him. When Aimee decides to take her class on a field trip to Wyatt's ranch trouble is afoot when Wyatt is taken aback by the surprise company but takes it all in stride. A bad snow storm is brewing and Aimee needs to get the children back to school, but the storm becomes quickly out of control and an accident happens stranding Aimee and the children. Wyatt comes to the rescue by freeing the group and bringing them all back to the ranch to wait out the storm.

It's Christmas Eve and Wyatt has this group of kids and their determined teacher in his home where he must make the best of things. In addition, he finds it futile to resist the pixie that is Aimee and slowly his heart opens to the possibility of happiness after all.

Rugged Hearts ( Kinnison Legacy 1) by Amanda McIntyre is a classic in the making. It is a feel good story with just enough heat that brings us back to the basics of romance. Wyatt has his reasons for being the way he is and Aimee has hers, but when brought together all the reasons come to naught when there attraction and heart abounds. In this story in particular, the children play a big part in bringing the end results about. When Wyatt sits the wide eyed kids down and reads them the same Christmas story that Jed read to his young sons, tears suddenly appear. Such a great lesson is learned from this great read. I highly recommend Rugged Hearts. I enjoyed it and I think you will as well.