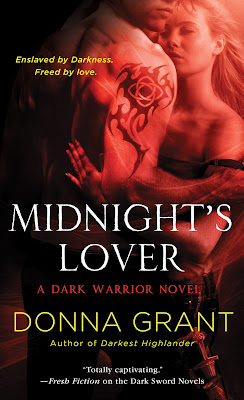 Ian Kerr, thrust into future when the evil drough, Dierdre gets taken into the 21st Century, has been hiding in a cave in the highlands of Scotland for some time. Struggling with his god, Farmire, the god of battle, no less, after his twin, Duncan was murdered by Malcolm at Dierdre's behest. Ian feels he is no company for anyone. He begins to "talk" to Duncan and can't decide whether it actually is Duncan speaking to him or if he is going mad.

Modern day Druid, Danielle Buchanan hasn't had an easy life. Originally from the US, she was sent to live with paternal aunts in Scotland when both her parents were killed in a car accident. Her Aunt Josie immediately sees the Druid magic flowing through her niece and over the years she hones and encourages Danielle's magic until it flows strongly within her. Danielle has the ability of finding lost items but must return them to the rightful owners or she suffers greatly.

New Year's Eve, Danielle plans to ring it in with friend Mitchell, but things go awry when Mitchell wants more than Danielle is willing to give. As she leaves his flat, Danielle trips and finds an ancient looking key in the street and the key gives her the mission to find McLeod Castle and return the key to those who dwell there. During her drive, a snowstorm hits and she has a car accident that propels her car down an embankment. Danielle urges on and ends up walking through the mountains, where luckily Ian finds her, drenched to the bone and almost frozen.

Once Danielle recovers and listens to Ian's story, she compels him to help her get to McLeod Castle, whether he is ready or not. Along the way,  Ian and Danielle find an easy attraction to one another and they become closer and closer. Ian's adaptation to modern life is humorous as well as quick and Danielle's ease with Ian is very appealing. In fact, the relationship between the couple becomes super steamy.

In the meantime, both evil drough,Dierdre and Declan Wallace continue their plans to end the Warriors and take over the world. Their presence itself leaves a dark cloud hanging over everyone's world that the Warriors as well as the Druids need to eliminate.

The union of the Druids with the Warriors and an easy one. They have become one as the years have gone on and accepting of new Warriors as well as Druids. They still must remain hidden from the modern world as McLeod Castle is on no modern map and it's been hidden for centuries by Druid magic.

Will Ian be able to come to terms with his twins death and keep Farmire at bay. Will Danielle convince him he is no danger to her and he is a good man who deserves the love she wants to give? All of these questions are answered in Midnight's Lover by Donna Grant. Grab it as soon as you can.

Yes, I am a HUGE fan of the Dark Sword and now the Dark Warriors series. These characters have become family to me and I am invested in their outcomes. Midnight's Lover is now my favorite read so far. Donna Grant is so at home in this series, it's like a homecoming, a reunion with family and friends. Her writing only gets better and better. I am now waiting with bated breath for the next book, Midnight's Seduction to release. I believe that Donna Grant has definitely come into her own with this direction her series has taken and I thank her for such an amazing book.

At the time Donna Grant gave me this book, I did not know until days later that she had dedicated it to me. I am blown away by her kindness and was in tears when I read the dedication. Regardless of that dedication, my review is non-biased. I truly loved it and it is my favorite one to date.
Thank you Donna for being a true friend and for accepting my quirks. I adore you and you can always trust me to be honest with you. Love you bunches!!!
KIM
Posted by Kimberly Rocha at 12:00 AM