Nine Rules to Break When Romancing a Rake by Sarah MacLean 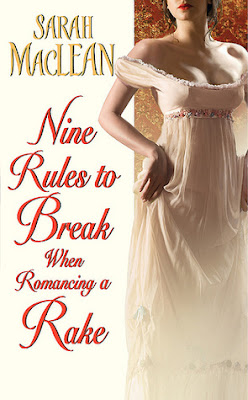 Lady Calpurnia Hartwell is a 27 year old spinster, known as the prim and proper daughter to the Earl of Allendale.  She laments that season after season, she remains unwed.  When her younger sister becomes engaged to a duke, she feels the weight of her inadequacy even more.  She wants more than anything to drop her proper façade and live life to the fullest.  She compiles a list of nine scandalous activities that she hopes to complete in the near future.  The first?  To kiss someone passionately.  Callie has born a secret desire for the Marquess of Ralston, Gabriel  St. John , since her teenage years.  And so she shows up in his home, unexpectedly, in the dead of night to complete her first task.  Gabriel is captivated by Callie, so unlike his many narcissistic, experienced lovers.  They enter a partnership of sorts:  Gabriel will oblige Callie’s desire if she will help his new-found sister prepare to enter into London society.   The kiss is just the beginning of Callie’s adventures and Gabriel can’t help but to become a willing participant in encouraging her along.
What a wonderful, sexy, unique Regency romance!  Callie is innocent, but adventurous, and Ralston is the epitome of the handsome rake.  He’s arrogant and self-assured, with a somewhat tortured past that leaves him wary of the idea of love.   The set-up is unique and intriguing on its own, but what drew me into this story was the author’s thorough characterization of the hero and heroine, her attention of detail, and the incredibly smart and sexy banter between Gabriel and Callie.  Their chemistry is off the charts and every scene between them had me rooting for their HEA more and more.  The scenarios Callie lands herself in are funny and unpredictable and very entertaining.   The sex is hotter than the average historical romance and far from ordinary.   It’s the kind that has you almost holing your breath for 10 pages, while the time just flies by.    Delicious.  I recommend this book to lovers of historicals and strong heroines, but it’s also a great introduction for those new to the genre.    I’m off to read the next two in the series!