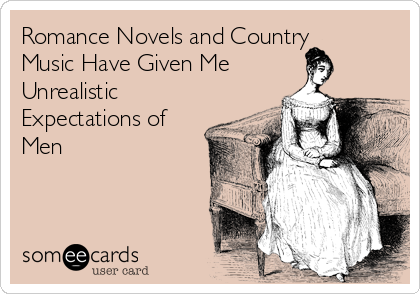 Hi!  I’m Stacey, and I’m a huge fan of both country music and romance novels.  Both things are treated by mainstream society with a heaping degree of scorn, and most of the time, both are seen by the other fandom as a last bastion of potential acceptance.  The country music lover who snarks about romance novels they haven’t (and never will read), and the romance reader who thinks country music is the worst possible genre to love(despite the fact they’ve never listened to a note). Yet when reality sets in, fans of country music and romance novels are more similar than they would ever think.
First, when scorned by mainstream media, we create media sources that will cover and review examples of our favorite items.  Scorned by the mainstream media. Romance novels are reviewed by tons of adamant and excited bloggers, from excited readers to publisher and mainstream media backed websites.  There is even a pretty mainstream magazine, as well as a brand new fanzine.  Country music has a similar system of reviews, from country divisions of mainstream magazines to a whole network of country music devoted radio and television stations.
Second, when excluded by mainstream award shows, we create our own.  The RITA awards, the RNA prize, the ACM, the CMA and the CMT buckle (and more) showcase the best our favorite medium has to offer.
Third, we give other fans a chance to gather and meet each other in a safe space.  Multi author signings attached to conferences, huge multi-day events and Fanfest.  Each allows creator and excited fans a chance to interact, even for a little while.
We are outsiders, doing things that are outside the purview and the interest of mainstream media.  And for lovers of both romance novels and country music, if what we love is wrong, we do not want to be right.