SPOTLIGHT ON ~FOREVER MINE by MONICA BURNS~

Looking for a wonderful time travel novel with a superb story? Look no further than Monica Burns ,FOREVER MINE
#BOC Member, Joann M. says "Time travel, romance and a great storyline can't get much better than this book. Loved it." 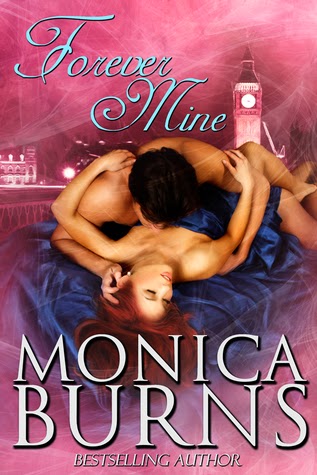 Her future lies in the past

When a bomb explosion thrusts Victoria Ashton backward in time to 1897, she’s forced to impersonate the Countess of Guildford. Despite Victoria’s attempts to convince the earl she’s not his wife, her counterpart’s infidelity, lies, and ill-tempered personality makes the task almost impossible. Worse, Victoria finds herself falling in love with a man who loathes her. Only when the earl learns to trust her does she realize her future lies in the past. But love always comes at a price, and she must make a painful sacrifice in order for them to be together.

Her love is what will save him

Nicholas Thornhill, Earl of Guildford has been searching for his missing wife for three weeks. Rumors of him being guilty of murder make him unwilling to believe his wife’s latest in a multitude of lies. But the changes in Victoria continuously surprise him. Despite his best intentions, he finds the contempt he once felt for his wife turning into something deeper and stronger. But when danger threatens to separate them forever, he must forge a bond with her that crosses the boundaries of time.
AMAZON BUY LINK:
Posted by Kimberly Rocha at 10:00 AM