#REVIEW- Married to a Perfect Stranger by Jane Ashford 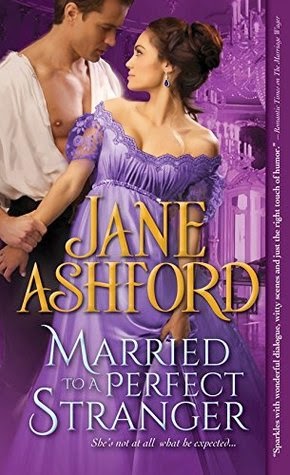 Mary Fleming and John Bexley were not the shining stars in either of their families. So it was suggested that the two marry and settle into a comfortable existence. Soon after their marriage, John was called away on a two year long diplomatic mission, leaving his new wife to her own devices.

In their time away from one another, each matured in their own way and once reunited, these changes in each of them confuses the other. John remembers an amiable and quiet wife and is perplexed when he biddable wife is replaced with a vibrant and outspoken Mary. Mary is a bit taken aback by this new and formidable John, but annoyed when he expects her to be the same woman he left behind.

Beginning again is a bit difficult for the pair, whose expectations of one another are rather skewed, but the journey Mary and John take is an exciting one with revelations as well as romance.

Married To A Perfect Stranger by Jane Ashford is the first book I have read by this author. I truly enjoyed the story. John and Mary has become essentially strangers to one another. Quite honestly, they never really knew one another when they began their relationship. I enjoyed the reactions each one had when they found out something new about one another and how they come to terms with the new level of maturity as well as understanding. I look forward to reading more from Ms. Ashford and I do recommend Married To A Perfect Stranger.