The Dangerous Duke of Dinnisfree (Whisper of Scandal #5) by Julie Johnstone *FLASH GIVEAWAY!* 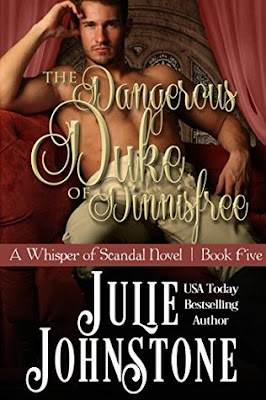 Once again I am blown away by Julie Johnstone and her innate ability to suck the reader into her world and never let go!

In the latest A WHISPER OF SCANDAL NOVEL, THE DANGEROUS DUKE OF DINNISFREE, we have the duke, Justin Holleman, who has been in service to the crown for some time now. His oath to protect the crown above all else keeps him focused, and his complacency in all other areas of his life, leaves him unable to form relationships beyond the surface. Now, the Prince Regent has given Justin the task of retrieving love letters that Prinny sent to his mistress, which if were made public, would cause trouble for the prince's game of divorcing his wife. His loyalty to his prince comes at a cost.

Miss Arabella Carthright is frantic over her inability to pay for her mother's stay at the Stanhope Home for the Mentally Impaired. The young miss spends her time crafting gowns for the ton. Even though things are grim for Arabella, the gowns she has made for the wealthy Lady Conyngham should render enough coin for the home. Unfortunately when Arabella arrives, Lady Conyngham is in a tizzy over something and takes her bad mood out on the seamstress.  Lady Conyngham refuses the gowns and furthermore promises to tell Arabella's boss about the issue, which will undoubtedly leave Arabella without a job. Not only is Arabella's mother in the home, but her father is recovering from a stroke and cannot help in the day to day either. Everything is on poo Arabella's shoulders.

When Arabella exits Lady Conyngham's rooms, she is met by a mysterious man who offers to help her gain coin. Desperation makes Arabella do things she would never have though possible before, thus embroiling her in danger as well as trouble. When Justin meets Miss Carthright feelings emerge that he tries to hide deep down, but her tenacity and her beauty cause his emotions to rise for this troubled woman. The more involved the duke and the miss become, the more dangerous and exciting things morph into and the emotions that rise between Justin and Arabella could lead to demise or ecstasy. Which will actually overrule?

THE DANGEROUS DUKE OF DINNISFREE is a fast-paced, well written tale of intrigue as well as romance. Ms. Johnstone is so savvy at merging the two that she has earned a top spot on my favorite author list. I feel Arabella's sorrow and desperation, her need to make sure her family survives. Justin's past has so much to do with his present stance on life, but it is so fascinating to watch his progression from the seemingly cold man of duty, to a man who would do anything for the woman he ultimately loves. Two thumbs up for this fifth tale in A WHISPER OF SCANDAL series by the very talented Julie Johnstone. 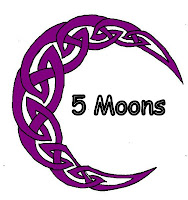 GIVEAWAY ALERT!!
LEAVE A COMMENT TO WIN AN EBOOK FROM JULIE JOHNSTONE!
TODAY ONLY!