Hello my awesome peeps!!! Please welcome author,
Cassie Hayes to Book Obsessed Chicks! We are so happy to have her!

Thanks so much for featuring us, Kim!

Tell us a little bit about yourself.
I'm older than I like to admit. I grew up watching Little House on the Prairie when it was new! I truly identified with Laura because I grew up in farm country. I had all sorts of adventures as 'Laura'. Now I live on the Pacific Ocean in Southern California with my husband and 17-year-old cat Fred.

Tell us how the Dalton Brides Books come to be.
That crazy Kirsten Osbourne shanghaied Kit Morgan and me at the Romance Writers of America annual convention last July. When she pitched the idea, we raced to see who could say yes first! It sounded like such a fun project for us as authors AND for readers. Our fans had been begging us to write together for months, and this seemed like the perfect solution. Kirsten is always so smart! (Don't tell her I said that.)

What are you currently working on?
Readers are chomping at the bit for the next set in the series, which will follow the three Blue brothers, who are introduced in how shared epilogue. In looking at our writing schedules, we're looking at a spring release for those. I'm also hashing out a new entry for my Gold Rush Brides series.

Did you always want to be a writer? If not, what did you want to be?
Oh, yes, but it seemed like such an impossible dream. I had this bookshelf in my room, tucked into a dark corner, that held all my writing books. I didn't want them in my living room, with all my other books, because I didn't want anyone to know my secret dream. When I somehow landed a journalism job — it's still a bit of a mystery — I realized that if I could do *that*, I could write fiction.

Who was your favorite character to write and why?
Bonnie was definitely my favorite. I imbued her with so many of my own insecurities, but she was still strong — stronger than she knew. As strong as she was, though, she had her moments of weakness. I loved the few minutes at the train station when she was seething at her sisters and daydreaming about a train killing everyone but her. I've had that daydream so many times!

Do you have any role models? If so, who?
Well, Kirsten is honestly one of my role models. She has an incredible drive and work ethic that just puts me to shame. And there are so many talented writers out there that inspire and influence me that it would be hard to just name a couple. If I had to, I'd choose Stephen King. Not for content but how wonderfully he writes. He can tell you all about a character in just a sentence or two. It's really quite magical.

Where can you fans meet you?
The best place to find me is in Pioneer Hearts, a Facebook group I started with Kirsten for fans and authors of western historical romances. It's unlike any other 'genre fan group' I've ever been a part of because our readers are such Chatty Cathys! But we love them for it becasue it means we get to interact in such a fun way. But all my contact info is also on my website, if readers prefer to email, etc.

Who are your favorite authors?
I genre hop a lot. Romance, westerns, suspense, horror, cozy mysteries. You name it, I'll read it.

What is next for you?
I have some outside projects I'll be working on at the beginning of the year, then it'll be diving back into the Gold Rush Brides and the Dalton Brides series. I'm looking forward to writing about Hank Blue!

What would you like readers  to know about you?
That I love interacting with them! 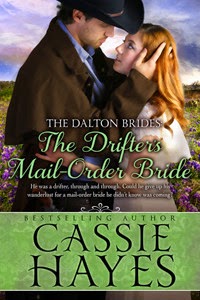 He was a drifter, through and through. Could he give up his wanderlust for a mail-order bride he didn’t know was coming?

Having grown up in the shadow of two beautiful sisters, ‘Scrawny Bonnie’ Blue knows she doesn’t stand a chance at landing a good man in Beckham, Massachusetts. The only way she’ll find a husband is by leaving her family behind to become a mail order bride. But when all three Blue sisters are swept up in a scandal, she has no choice to but to take ‘Gorgeous Gwen’ and ‘Lovely Libby’ with her…kicking and screaming, if she must.

Bart Dalton would be happy riding the range forever, but his brothers need his help to start a ranch in north Texas. He figures he’ll last a year or so before his feet get itchy again, which his brothers understand. As triplets, they can almost read each others’ minds. Except when his oldest brother ordered three brides for them. It would have been nice to have a little warning about *that*!

When Bart’s late to meet the train carrying the Blue sisters, his brothers get first dibs, leaving Bonnie standing alone and dejected once again. It only gets worse when her ‘intended’ finally shows up and balks at the idea of marrying her. The one thing Bonnie has going for her are her wits, and she puts them to good use by proposing a business arrangement that Bart can’t refuse.

Will Bart go back to his drifter ways, or is the elusive thing he’d searched for all his life sleeping in the next room?


* The Cowboy’s Mail-Order Bride by Kit Morgan
Posted by Kimberly Rocha at 12:00 AM